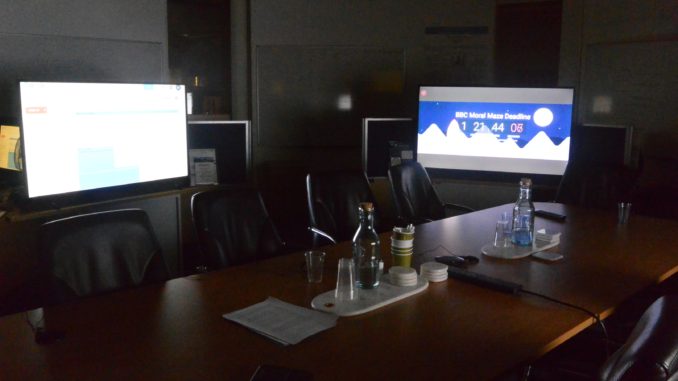 The countdown runs inevitably – our T-48h schedule marks the time window between the moment we received audio of the Moral Maze programme and the moment we need to release Argument Analytics to the BBC.

We are starting the annotation process in the morning at 9am on Tue 10th Oct. Our goal –completing it in eight hours. We have already a slight advantage, because members of our Argument Analysis Team live in different parts of the world – we have some analysis done by our colleagues Nuria Franco-Guillen in Australia (9h ahead of us) and Annette Hautli-Janisz in Germany, and the ARG-tech member Marcin Koszowy in Poland (1h ahead).

The experienced annotators from the Centre (Kasia Budzynska, Martín Pereira Fariña, Chris Reed, Rory Duthie, Marcin Koszowy, Jacky Visser ) are splitting their time between doing analysis themselves and helping less experienced analysts, amongst whom we have the members of the Centre who just recently took the training in argument analysis (Alison Pease, Dominic de Franco,Brian Plüss).

In the Argument Analysis Team, we work with academics from all around the world: Mathilde Janier in France, Annette Hautli-Janisz in Germany, Nuria Franco-Guillen in Australia, Elena Musi in the United States and Luana Marinho in Brasil. They join us remotely through the Analysis Wall – a large touch screen designed to allow for collaborative argument analysis (in the background of the photo on the left). Some of them woke up at 4am their time to join the annotation process.


We work also with Computing students from the University of Dundee: Rory Magowan, Nicole Orr, Javier Ruiz and Teodora Udrea. They went through intense training and passed the difficult test which qualified them to join the Argument Analysis Team. We were impressed by their hard work and enthusiasm for the project.


The starting point was slow – we have only 4% of annotation done. The spreadsheet on the monitor allows us to keep track of progress.


This is better – we already have 97% of the annotation done. We are almost there, but all of us start to feel quite tired.


We did it! The work of Argument Analysis Team is done.

The task of Inter-textual Correspondence is hard…


but we need a solution.

The Analysis Team reports to the Tech Team (John Lawrence, Brian Plüss, Mark Snaith, Rory Duthie, Chris Reed) about the outcome of the analysis. Now, they need to process the annotation through technology developed in the Centre in order to produce final visualisation in Argument Analytics.


The Tech Team is preparing for the long night – everything that is essential: the “Information is Beautiful” book and lots of coke.

In the morning, some of us are still going. T-48h without sleep for some of us.

Racing against time, which is starting to speed up with every hour. Argument Analytics is almost done and released to the BBC…


… but we still need to check that everything is working.

Test Your Argument needs some refinements too.

It is sunny in Scotland and ARG-tech.

We look into interesting analytics…

…from the Moral Maze debate.

From now on, the Centre stays in constant contact with the BBC to coordinate and set everything up.

We are tuning to BBC R4 too.

The management and coordination of the Centre is not an easy job.

Behind Behind the Scenes – final editing of videos in action.

The Social Media Team (Elaine McIntyre, Dominic de Franco and Debela Tesfaye) is about to be finished with their tasks as well.


We do not have much time left.

On Skype with the BBC – the last fixes and improvements.


The team in the ARG-lab listening to the Moral Maze programme.